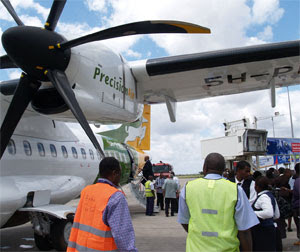 By Felix Lazaro
The Citizen Correspondent
Dar es Salaam. Precision Air has announced it would increase the number of flights it makes daily to Arusha starting today in a bid to meet increasing demand and gain from expanding activities that include linking the northern city to the rest of the East Africa.

According to Precision Air commercial director Patrick Ndekana, there will now be five daily flights to Arusha.
Besides the development, the Airline also announced that it would increase its travel capacity to Mwanza by introducing use of Boeing 737-300 on Wednesdays, Fridays and Sundays in a bid to meet increasing demand.

“This is in addition to the already existing ATR and Boeing flights,” said Mr Patrick Ndekana.
He said the airline had experienced the pressure of increased domestic and regional flight demands, particularly over the past quarter, prompting it to expand its services.
“We have added two important regional routes - Lubumbashi and Lusaka over the past two months both of which have resulted in stronger than expected growth for the airline,” he said.

Currently Precision Air has grown to regional footprint of 16 destinations while also being strategically focused on further untapped opportunities in the domestic market.
Already the company has announced cancelling its four weekly flights to Johannesburg starting 17th September this year in order to enhance its domestic operation in the country.
“We have decided to focus on the growing domestic demand and on more lucrative markets,” said Mr Ndekana.

He also said the office has suspended Kigoma and Musoma operations due to safety reasons and to allow for the ongoing construction of the Kigoma airport runway, and that the routes will resume once renovations are over.
Posted by Unknown at 4:00 PM